The American Association for the Advancement of Science recognizes the world’s leading researchers.

TAMPA, Fla. – Eight University of South Florida professors whose research has set a global standard in a range of disciplines from environmental sciences to health and aging studies, and from chemistry to criminology, have been named Fellows of the American Association for the Advancement of Science, the world’s largest multidisciplinary scientific society.

The USF honorees include a faculty member whose work in pioneering a new treatment for post-traumatic stress disorder is helping save the lives of veterans; a criminologist whose research into why kids kill has helped guide criminal justice systems nationwide; a freshwater ecologist whose research has led to vital conservation efforts and sustainable policies across Florida and around the world; and a professor who led landmark research into the impact of caregiving for the families of patients with Alzheimer’s disease and other chronic conditions.

They are joined in recognition by a marine biologist who has spearheaded a global network of satellite and other observation systems to chart biodiversity and changes in ocean environments from a local to global scale; an anthropologist whose work in understanding the relationship between people and their environment is helping renew neighborhoods near USF and improve environmental management around the world; a chemistry professor whose work is helping advance drug discovery, especially for treatments for cancer and infectious disease; and a neurobiologist whose research of the brains of birds is unlocking the secrets of the evolution of the brain in mammals.

Election as a Fellow is an honor bestowed upon AAAS members by their peers. This year, 416 members from institutions around the world have been awarded the honor in recognition of their scientifically or socially distinguished efforts to advance science or its applications.

“We are incredibly proud of the career achievements of these eight faculty members and the work they have done to advance knowledge in fields that touch the daily lives of people both in the Tampa Bay region and around the world,” said Paul R. Sanberg, USF senior vice president for research, innovation and knowledge enterprise. “To be named as an AAAS Fellow is one of the highest honors in academic research, and it is one that recognizes the monumental impact these individuals have had in addressing universal problems and in creating a healthier, safer and more compassionate world.”

New Fellows will be presented with an official certificate and a gold and blue (representing science and engineering, respectively) rosette pin on Feb. 16 during the 2019 AAAS Annual Meeting in Washington, D.C. The tradition of AAAS Fellows began in 1874.

Kevin E. Kip, Ph.D.
Elected AAAS Fellow in the Medical Sciences Section
Citation: For pioneering and groundbreaking research in the fields of interventional cardiology and psychotherapy, particularly for development of new treatments for post-traumatic stress disorder. 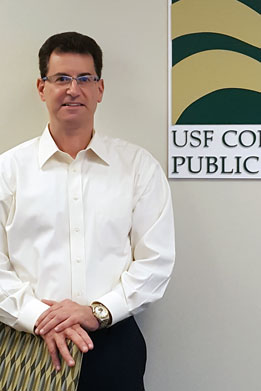 Kevin E. Kip is a Distinguished Health Professor in Epidemiology and Professor in the Morsani College of Medicine, Department of Cardiology, at USF. He also holds a joint appointment with the James A. Haley VA Hospital in Tampa. He previously served as executive director of the Research Center and interim associate dean for research for the USF College of Nursing, as well as interim chair for the Department of Epidemiology and Biostatistics for the USF College of Public Health. Dr. Kip is the leading researcher worldwide in the study of Accelerated Resolution Therapy (ART) — a brief, emerging, evidence-based treatment for post-traumatic stress disorder (PTSD) and related comorbidities. He led a $2.1 million Department of Defense grant that, to date, included the nation’s largest study on the effectiveness of ART for military service personnel and veterans. Dr. Kip also oversaw the training of military clinicians in ART at Walter Reed National Military Medical Center, Fort Hood, Fort Stewart, and Fort Drum. Leveraged in part by three studies directed by Dr. Kip and subsequent peer-reviewed publications, more than 2,000 clinicians have now been trained in the ART protocol across the country and internationally. In addition, Dr. Kip’s more than 20-year career in epidemiology has had substantial impact on the fields of interventional cardiology and cardiovascular disease at large. For example, he was the first to show that in patients treated with angioplasty for coronary artery disease, those patients who also had diabetes had poorer long-term outcomes than those without diabetes. He also was Principal Investigator for the National Institutes of Health/National Heart, Lung, and Blood Institute Dynamic Registry of Percutaneous Coronary Intervention (PCI), which, over a 20-year period, enrolled more than 10,000 patients and provided a comprehensive assessment of the evolution of PCI. Dr. Kip is a Fellow of the American Heart Association; and a member of the American College of Epidemiology, and Society for Epidemiologic Research. He holds a B.A. in Psychology and M.S. in Industrial/Organizational Psychology from the University of Central Florida; M.S.P.H. in Epidemiology from the University of Alabama at Birmingham; and a Ph.D. in Epidemiology from the University of Pittsburgh.
Read the full article at www.research.usf.edu